Menu
back to all posts

How to Eat an Artichoke 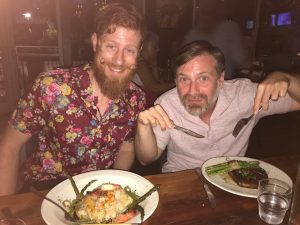 My friends are undeniably classier than me. Well, except for one very special friend that I have deemed my social equal by adaptive standards of accepted etiquette. I have progressively made significant strides in adapting to cultural standards of city life, but my ‘country’ side still reappears at random inappropriate times.

For example, recently at an upscale restaurant where I was dining with three of my best friends, one of them being my social equal, there were two appetizers on the table. One appetizer had bacon which I can’t eat because I am a pescatarian (a person who does not eat meat except for fish). The other was grilled artichoke.

Where I’m from, we not only eat a variety of weird things, we grow, catch, and raise our own. But until that evening, I had never cooked, cleaned or eaten an artichoke. In fact, I had barely given the strange thing a curious glance when I passed it in the grocery store.

Of course, all my friends dug into the bacon-covered dish while I looked with hesitation and excitement at the mysterious vegetable in front of me. I picked up a leaf and chewed it. It was sharp and impossible to swallow, but I somehow managed to do so.

I quietly leaned over to my third friend on the right and confessed, “I’m not sure I’m eating it right.” He laughed and said, “You’re doing fine.” He is as socially awkward as me, so why I accepted his opinion, I have no idea. I chewed on.

When he finally dug into the artichoke, he began to choke! I was smiling with a “told-ya-so” sort of grin but said nothing. An explainable comradeship had developed with our mutual naivete regarding culinary specialties.

Eventually, my two friends across the table started working on the artichoke as well. We both stared in amazement as they ate the center of each leaf and left the outer part abandoned. So that’s how it’s done!

The evening would have proceeded smoothly with no evidence of our etiquette blunder until “IT” fell from my sweet friend’s napkin … a solid wad of chewed artichoke. Are you kidding me?! We had been discovered! We all laughed. I felt strangely betrayed that I had gone through the trouble of swallowing mine!

Sometimes in life we do the wrong thing. Sometimes we think it’s not obvious until it suddenly falls out of our napkins. Other times, we think no one notices because we believe we have completely swallowed the evidence.

Swallowing the evidence can be just as painful as the embarrassment of being discovered. Trust me, trying to bear the burden of concealing mistakes, hurts not just once, but twice! Anyone who has ever eaten an artichoke incorrectly understands exactly what I mean.

So, be it an artichoke or sin in our lives, we must accept that we cannot erase bad decisions. We cannot conceal them or hide them from God or others forever. For this reason, it is very important that God has given us solid and absolute expectations of our behaviors and responsibilities to Him and to other people. Because we are human, it is even more important to acknowledge the importance of living continually under His grace.

I have been unbelievably blessed to be surrounded by people who care for me and lovingly let me know when I’ve messed up, who lead the way by example, and accept me for all my strange ways. I have been even more blessed to know and serve a loving and forgiving God. A God who is “…slow to anger and rich in love.” (Psalm 145:8 NIV)

Even if I never eat an artichoke eloquently or live quite as righteously as I should, I am convinced that nothing can separate me from the love of my Father. (Romans 8:37-39) There are no other words to acknowledge my appreciation for the grace that I have received. I am truly, truly blessed.